A pale blue Caprice settles into a narrow alley. Miguel, the driver, pushes his thick, black hair out of his eyes and scowls into the rear view. He inspects his teeth, frowns, and licks across the top row.

“I think I’m gonna quit smoking after this.” Miguel says, nudging Telly with his forearm.

Telly is sunken in the passenger seat, folded into his own thin body. His leg bounces, foot tapping on the floor of the. He glances over his shoulder.

“Maybe you should start.”

Miguel signs the cross on his chest. He reaches under the dash, then swings out of the car. The trunk lid rises, blocking Telly’s view.

Miguel returns to the car and sets a black duffel bag onto the seat. Telly reaches in, shuffles through and pulls out a sawed-off shotgun. He inspects the weapon, assessing every inch. He clicks the barrel open. Empty.

Telly dives into the duffel bag again, this time producing four steel slugs. He loads the gun. He fishes into the bag one last time.

Telly pushes the blade up and presses a finger onto it. A pearl of blood rolls down the first digit. Telly plugs the finger between his crooked teeth. He takes a deep breath in, and smears his tongue across his finger to the roof of his mouth. He pauses and savors the taste. A breeze cuts through the open windows across Telly’s red hair. He smiles.

Telly nods and exits the car in a single swift turn.

Miguel stands up to meet him. Both men face the breeze. The night is oil.

A police siren whines in the distance. Miguel lights a cigarette. A thread of smoke oozes into the night. He holds the first drag deep in his lungs.

“The next job is always the last,” says Miguel, through smoke. “but, this one – man -this one’s really gonna be mine.”

Rats run between the dumpsters.

Miguel hoists the cigarette, “Before you go? Smoke one with me?”

Telly shakes his head and pops back into the car, to the duffel bag.

Telly ducks out of view for a moment, rising again with a nylon stocking stretched across his face. His nose is mashed into a bulbous knob. His lips fold up in pink blobs. Miguel laughs through a puff of smoke.

Miguel pulls the last drag from his cigarette. He spits the smoldering filter to the pavement and snuffs it with his heel. It sizzles. Telly hops out of the car, shotgun in hand.

The night has gone silent.

Telly takes a long breath, then strides to the door and taps it twice with the barrel of the gun. The door to budges open.

Telly hoists the shotgun to eye level and pushes forward. Miguel, in the driver seat now, half-turns the key in the ignition. He settles into his seat as the bay doors close.

A rat drags a rotting bagel across the alley. Miguel makes a finger gun and shoots it.

Telly scurries into the passenger seat. He is empty handed. His face and jacket are flecked with an abstract of blood.

“What the fuck happened, Tel?”

Telly yanks the nylon from his face and stuffs it into his jacket pocket.

“Tel! What the fuck? Where’s the painting?” 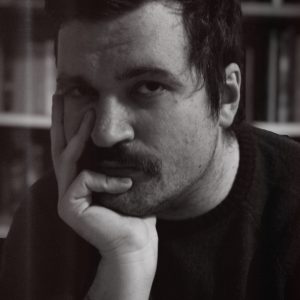 Ian Sutherland is a Chicago based writer and [REDACTED]. A BFA student in Entertainment Writing at Full Sail University, Sutherland splits his writing time between prose and screen. When he's not typing, Ian spends his time exploring the streets of his home city trying every cup of coffee he can get his hands on. He's a horror buff who enjoys seeing how much his fiancee will question his sanity, and he loves his cats very much. Read more of Ian's work at  https://iansutha.wixsite.com/mysite