“Please, Blake, you gotta help me.”

Actually, I didn’t. Truth was, I barely knew the guy. Once a week we sat in the bleachers and watched our daughters play basketball. That was it.

When I didn’t answer he went on, “I just want someone there when I talk to him. Finny’s always got a big guy with him and it’s intimidating.”

The parents cheered a basket and I clapped for a while. Ten eight year-old girls ran down the court and I thought about why Erik needed help.

Erik was always a big talker, liked to brag about Vegas trips betting twenty grand a pop in the sports book, comps straight down the line as he chased the six figure payouts, if you believed him, which I only half did. Last time I was up over a hundred k, blew half of it on a fully authenticated Ricky Henderson rookie card. Of course, gamblers never brag about their losses.

“Erik, I can’t help if you bullshit me.”

He heard the word help and latched onto it, saying quietly, “I owe forty grand. Thirty-eight and change.”

As a detective, I save a lot of idiots from themselves, but they’re always clients. Otherwise, I believe experience is the best teacher. Especially on basketball night.

“I will, but I need two weeks, and I need to explain that to him tonight.”

“That’s what I’m saying, I’m maxed out right now, bro. I don’t even have fifty bucks for dinner. But in two weeks I’m flush.”

“Erik, you drive a fifty-thousand dollar car. Your watch is probably worth five grand right there.”

He shook his head. “All I need is for you to stand there while I talk to him.”

He was over his head and didn’t know it. He’d talk to Finny, and then Finny’s large friend would pound him into meatloaf. Unless, of course, I did more than just stand there.

My daughter missed a basket by about ten feet and Erik’s daughter came over to console her. It would be hard on her when she was homeless because her idiot dad lost everything.

“I’ll help you if you lay off the gambling,” I said.

Which I guess made me the idiot.

“On my mother’s grave,” he said. He might even have meant it.

At the half, we ducked out of the game and walked toward the food trucks lining Telegraph, following the smell of spices and fried grease. Erik practiced his assurances on the way, but his nerves were showing.

We wove through the milling crowd and found Finny, a tall white guy with a falafel in his hand and a shock of red hair peeping out of his sideways A’s cap. Next to him a fat guy tried to look tough while drinking a giant fruit smoothie.

Finny took a bite and asked me through his food: “You a friend of Erik?”

“I’m just here to keep him out of trouble,” I said.

He gestured to his large sidekick and said, “Yeah? He’s got 17 rounds of trouble plus one in the chamber.”

Erik stepped back involuntarily, hands up. He said, “Whoa—” but I interrupted him.

“Finny,” I said, nodding to his hat, “how you like the bullpen this season?”

He looked at me blankly for a moment and then said, “Bullpen’s fine. The problem’s big hitters who shit the bed when it matters. That and bad coaching.”

He slapped his friend’s stomach, who smiled and nodded.

I said, “How would you like an authenticated Ricky Henderson rookie card?”

Finny looked him and said, “For real you got this?”

I said, “That cover his debt?”

Finny looked back at me and said, “If it’s for real, yeah.”

We all looked at Erik.

Finny slapped his back and said, “Great, we’ll drive.”

I walked back to the game in time to see my daughter make a free throw and the whole place went wild. 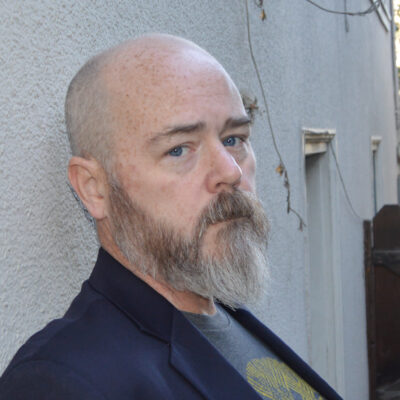 Michael Long writes mysteries because it’s cheaper than drugs and more fun than therapy. He frequently ends sentences with prepositions, uses the Oxford comma sporadically, and when he’s not sure what to write he has a guy come through the door with a gun. He lives in California with his wife and three children. Further details at Michaellongwrites.com