He saw Marlene from the bottom of the stairs before she saw him.A brilliant ray of sunlight burst through the overcast sky, glowing around her like a halo. In this light, she resembled a saint, or perhaps a Madonna. He laughed at the irony.

His pulse quickened—she always had this effect on him. He took a deep breath, expanding his lungs until he could inhale no more, and then slowly, ever so slowly, he exhaled, all the while watching her. God, she was beautiful.

She descended the stone stairs to the piazza, still not seeing him. He wondered whether he should call out to her. Over a year had passed since they had parted, and the memory of their last conversation still pained him. His face grew warm as he recalled her words: “When you leave, there must be no further contact between us. It’s for the best.”

Why was she still in Rome?

He moved behind a stone column at the base of the steps to watch her walk across the piazza, and as she came closer he shrank into the shadows to remain hidden from her. He longed to reach out, to seize her hand, but he did not move. Better to let her pass without knowing he was back.

A flock of pigeons scattered into the air above his head, and she turned at the commotion. Her gaze moved to where he stood, and he knew she saw him standing in the shadows. Her mouth opened slightly and she raised her right arm as if to wave, but immediately lowered it.

Two officers of the polizia di stato strolled toward him. He pretended to study the map he’d been carrying, hoping they would pass without noticing him. They came closer but did not stop.

Once the police moved past him, he scanned the piazza and found Marlene again. She was walking away without appearing to rush. For a second, he felt rooted to the rough stones of the piazza. He snapped out of his stupor and ran after her, weaving his way through tourists taking selfies at the fountain. When he caught up to her, he grabbed her arm and spun her around to face him.

Her face flushed and she yanked free from his grasp. “Were you following me? Why are you here?”

“I’ve been back for almost a month now. I thought you’d be long gone.”

“Yeah, well, I’m still here, thanks to you. I’ve been scraping by. I didn’t have many options after you took off with the stash. Lucky the polizia didn’t connect me to the job.” Her voice was bitter.

“Brian? He left Rome right after you did, said you’d taken all the money and he was going after you. Wait—are you telling me that little bastard has my money?”

Her brow furrowed as she digested this information. Then she grabbed his wrist and pulled him through the crowd to a deserted alley. She abruptly stopped and faced him, her nostrils flared, her lips pulled back, her teeth bared like a wolf about to attack. She tightened her grip until he winced. Letting go of his wrist, she relaxed her jaw, and an unsettling calmness came over her.

“We’ve got a lot of catching up to do—but first you’re going to help me find him.” She smiled, and he remembered what happened to the last guy who’d crossed her. The police never did find all the pieces. God help Brian. 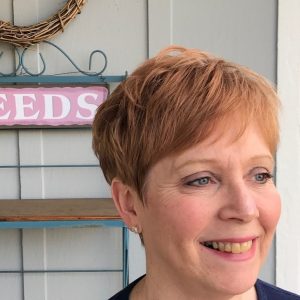 Barbara Buckley Ristine began her professional life as an attorney, but ultimately realized writing was more enjoyable and paid less. She can't seem to confine her writing to one genre, and she bounces between flash, historical, and speculative fiction. She avoids reality by spending most of her time falling down research rabbit holes. Her work has appeared in Bards & Sages Quarterly, the Mojave River Review, and Literally Stories, among others. She lives with her family in northern Nevada where she occasionally blogs at www.mydearestcassandra.wordpress.com.