The Zamboni driver started collecting fire ants when the snow began to thaw–and although the inspiration for the endeavor was not the weather but the removal of bandages from the third-degree burns on his left arm–this hobby was better than picking up a hunting rifle and blasting a bullet through his head like his father had. He would never do that to his son.

The insects were kept in an old peanut butter jar sealed with aluminum foil full of air holes. After obsessing for weeks about where to locate and hunt the fattest ants, the Zamboni driver walked three miles to the baseball diamond where Little League dropouts were smoking butts on bleachers, rounding second base. High school degenerates huddled in dugouts smoking crystal.

The Zamboni driver swaggered over to home plate and collected specimens. He pivoted on the mound, planted his ankles, kicked the dirt, and licked his fingernails. Ants stinging palm, he wound into that left-handed delivery and pitched toward the plate.

As a child, the Zamboni driver dreamed of being a giant. After his father pulled that trigger with blistered toe, the boy began to doubt his elephantine metathesis.

The inferno occurred on Christmas Eve, though it had been brewing for weeks from the ritual of cocktail party-hopping after hockey games. Driving under the influence into the neighbor’s mailbox at eighty miles per hour, windshield filled with flames, the famous Zamboni driver nearly melted into the steering wheel before Good Samaritans wrestled the charred-arm cherub from the dashboard.

After school, father and son hunted together, and by the end of the Indian summer the two had accumulated thousands of fire prisoners. Many had died, most often from fighting other ants to escape from the bottles. The torturers cut off their antennae, trachea, legs, and burnt them with a magnifying glass.

The Zamboni driver saw his moment approaching in a circle. The tulip leaves were orange, red, and purple; the injuries were healing; the burns not burning so much–yet the arm still felt distant, as if it wasn’t his, so he decided to amputate it.

Once the decision was reached, the Zamboni driver started to feel closer to the limb–it must have done some good all those years–not just hanging there: arteries and veins and muscles. The man did in fact have great memories of driving the Zamboni, but his career was finished.

He also cherished those moments holding his son, but the boy was old enough to walk now. Needing his arm like a hole in the head, the Zamboni driver circled the date on his calendar and sharpened the saw in the garage.

Using twigs, father and son built an obstacle course for fire ants. If they could scale the seven layers of inverted walls caked with fudge and poison, they were free. The Zamboni driver planted mice traps and added two armadillos and a poison dart frog from South America. There were holes cut in the bottom where the victims dropped, through tubes that led to a barrel of acid.

They opened the lids of the peanut butter jars in the middle of the course and out swarmed thousands of fire ants, crawling into a tangled mess. The boy was lost in strawberry magic. The Zamboni driver excused himself, warning his son to keep away from the barrel, reiterating the importance of safety goggles.

The man entered the garage. He picked up the saw. He could see the freedom, the burning regression. He began the amputation. The boy was splashing in the acid. The man could hear the screaming as he cut through those nerves, releasing the burnt fragments that had haunted him since the accident.

The Zamboni driver wrapped the stump in a Mexican blanket and waved the severed appendage over his head in triumph. He splashed his arm in the acid, submerging layers of mangled fire ants. The Zamboni driver began blowing bubbles. His lips disappeared, he grabbed his throat and the shaking of his body merged with traces and outlines of giant leaves falling from tulip trees.

~FIN~
"An Elephantine Metathesis of a Zamboni Driver" © 2012 Matthew Dexter 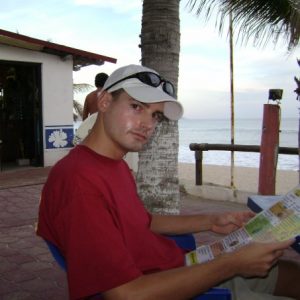