“Christ on a cracker!”

Myrtle swipes her glasses from the table and holds them up to her face. Sure enough, burnt into her Reduced Fat Cheez Thin is the haloed silhouette of the savior Himself. She turns it over in her fingers, the solitaire cards spread out on the dining room table before her momentarily forgotten, as she marvels at the Lord God’s face stamped upon her mid-day snack.

She tosses the divine delicacy to the dog. The pudgy mutt glances at the snack for a moment before lazily scooping it up with his tongue.

Neither Myrtle nor Judas are overly spry these days.

The storm door rattles, its hinges needing once again to be tightened and lubed. Myrtle makes a mental note to ask her grandson to take a look the next time he stopped in. She reaches for the tin on the credenza behind her, its advertised contents of butter-flavored cookies long gone. The tin was stacked neatly atop her sewing kit, which is surrounded on each side by upright greeting cards wishing her a happy 80th birthday.

She sets the tin on her lap, gently lifts the lid, resting one hand on the contents and returning the other to her cards.

The door rattles more frantically, and there’s a pop as the lock snaps and the latch releases.

Myrtle flips over the top three cards on the deck.

Footsteps in the entryway.

Nine of clubs to ten of hearts.

A shadow creeps over the table.

Myrtle moves the eight of diamonds over; flips up the five of spades.

Myrtle glances up from her game. The intruder is wearing a ski mask, but he’s one of Louise’s grandkids if she’s ever seen one. He’s a few inches over six feet, a big, bulbous nose protrudes from under the mask, and his voice is as charismatic as a cow caught in a potato sack.

Yup; definitely one of Louise’s boys.

“I certainly have no idea what you’re talking about.”

Two of spades to three of hearts.

“The Bingo money, ya old bag. It’s missing from the church safe.”

“How unfortunate,” Myrtle says, her eyes not leaving the cards. “Sounds like Louise is going to be in some trouble. She’s the treasurer.”

“Listen granny, I’ve got no beef with you, I’m just here to collect the cash.”

“Old lady living alone… I’d hate to see something happen to you.”

“Don’t worry about me, Sonny. I’m getting along just fine.”

The intruder’s hand moves to his hip, but Louise has her gun raised and a bullet in his leg before he can make a move.

She may not be too spry these days, but her reflexes remain on point.

The trespasser drops to the floor with his hands pressed to his leg, where he writhes and groans.

Myrtle hoists herself up from the table, as she isn’t getting around too quickly these days, grabs her cane, and approaches her wannabe assailant. She holds the gun at her side.

“What did you do that for?” he stutters between sobs.

Myrtle brings her cane down hard on the masked man’s chest and holds it there. “Because Louise needs to know who she’s fucking with.”

“Okay, okay. Keep the money. Just let me go.” Snot runs down from his nostrils to his upper lip.

Myrtle shakes her head. “Louise must be so proud.”

She raises the gun and fires once.

The only sounds are the echo of the shot and the ticking of the cuckoo clock on the wall.

Myrtle limps into the kitchen and scoops a cookie from the jar with the red rooster painted on the side. The chocolate chips are lined up to form a brown, baked-in cross.

“Would you look at that,” she says, taking a bite before returning to the dining room and her solitaire game, stepping over the masked body on the way. Hopefully her grandson will be by this afternoon; his to-do list keeps growing.

She stashes the gun inside the tin, then moves the upturned aces to the top of the table. 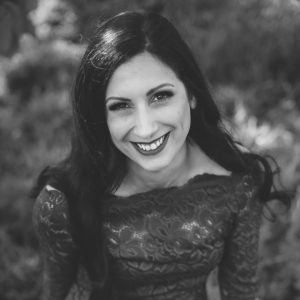 Kimmy Dee lives in Michigan, with her four beloved cats and one asshole dog. Her essay collections, Pussy Planet and Other Endearing Tales and Heart Boners and Unicorn Farts, are available from Mobius Books. Her short stories have been published by Tough, Pulp Metal Magazine, The Dirty Pool, Jokes Review, and in several anthologies. Kimmy's work has also been featured on Cracked.com.