Nugent Avenue was awash in trash. It hemorrhaged from garbage cans and onto sidewalks already polka-dotted with dog shit. The night was thick. It hovered about the shoulders like a shawl. Drunkards leaned against buildings, oblivious, catatonic. The piles of trash doubled as sleeping pallets for toothless vagrants. Whores posed on corners or indoors in front of soiled windows, tattered curtains swept aside. A gang of feral cats dined on a helping of vomit from a passed-out drunk.

Reese stepped over drunkards and around an aggressive whore blocking his path.

“Hey, baby. I’m Keisha,” she said, cupping her breast. “You and me both know you want this. Gimme five dollars and you can suck on it right here.”

The sound of tickled piano keys floated from the dilapidated building on the corner. The upper floor windows were boarded up, but the ones on the ground floor were intact and painted solid black. Two words were scratched onto a rustic board above the door: The Eel.

Reese reached for the door. His hand trembled. He breathed, pushed it open. Every head in the place snapped toward him. It looked like night inside. Smoky, too. A few tables. A bar. A single light-bulb in the middle of the ceiling. Candles here and there. A pianist tapped on a ramshackle piano with yellowing ivories, some of them missing.

Only men occupied The Eel.

Reese went to the bar. Dithering steps. A foreigner hobbling off the boat.

The bartender’s accent was Caribbean, his face dark-complexioned, handsome. Muscle stretched the limits of his already-tight shirt. Reese tried to keep his eyes off the guy’s mountainous chest and couldn’t.

“What you recommend?” Reese’s voice trembled, like his hands still were.

“I recommend not answering a question with a question. Now what you drinking?”

Ten or twelve men at five tables. A few more stood against the walls, sipping drinks or clutching empty glasses like props. Men in suits mixed with those in overalls. Businessmen. Laborers. Lightskinned. Blue-black. Men with manicured fingers. Men with hands chapped or scarred or ashen. A few held hands, fingers skimming fingers.

“Staring at somebody in here,” the spindly man said, “means you want something.”

Reese knocked back his bourbon, ordered another.

Spindly skulked onto the stool next to him. “So. What you want from me?”

“Then why was you staring?”

Temptation elbowed Reese, tried to get him to look at Spindly. He kept his gaze straight ahead but, from the corner of his eye, he could see the guy was nice-looking. Medium-brown tint. Lanky frame, but with a swell of definition in his arms. The skinny jeans made his thighs provocatively plump.

“Why was you staring?” Reese said.

Reese thought he recognized the song being tapped on the piano, but it was too out-of-tune to be sure. He sipped his bourbon. “I’m Reese.”

“You telling me your name? Ain’t no motherfucker in here ever told me his name before. That ain’t your real name, though.”

Spindly laughed. “You new at this, ain’t you? You new to The Life. Welcome.” He inched his stool closer, wormed his hand up the inside of Reese’s leg. “How about we go somewhere and I give you a proper welcome?”

Temptation thumped Reese again. But he said, “No. But thank you. Thank you for asking.”

Spindly smiled. “You have a good night.”

“Bartender. Another bourbon. A double.”

The pianist kept up the out-of-tune tapping. A candle burned out, made the dark bar darker. 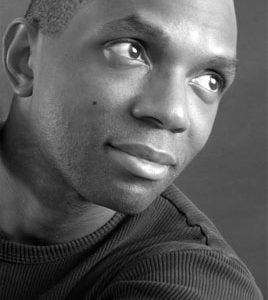 Joe Okonkwo's novel Jazz Moon, set against the backdrop of the Harlem Renaissance and glittering Jazz Age Paris, will be published by Kensington Books in 2016. His short fiction has appeared in Promethean, Penumbra Literary Magazine, and Chelsea Station Magazine. Upcoming work will appear in Best Gay Love Stories 2015 published by Lethe Press. He earned an MFA in Creative Writing from City College of New York. Joe Okonkwo is represented by Malaga Baldi of the Baldi Literary Agency. www.JoeOkonkwo.com