A Night for Chicken Pizza

It was 10:30 after a long Saturday and Cassidy and I were hungry, so we bought a chicken wing pizza at Currie Valley Pizza Works – wing sauce, chicken and cheese. Not my preference, but it was Cassidy’s favorite and I wanted him to have something he liked. Then we picked up a six-pack of Rolling Rock and I said “let’s go over by the river.”

We sat on the hood of my Dodge Ram and started eating. It was a cool night, but not cold. The Mississippi flowed past. I was thinking it would be nice to have Angie with us. I assume Cassidy was thinking the same thing.

My best friend. My wife. Thinking about it, my shoulders tightened.

Cassidy was picking bits of chicken off his pizza slice and tossing them into the water. “Do you think fish like chicken,” he asked.

We ate for a moment or two. The pizza felt like it was boiling in my stomach. A Red-Tailed Hawk flew overhead. We both watched it sail past, its wingspan seeming to stretch from sea to shining sea.

“There should be fireworks every night,” Cassidy said, looking at the sky.

“Sure! Like at the Vet’s Home on the 4th, but every single night. It’d give everything a little more pizzazz.”

“I don’t know,” I said. “Fireworks once or twice a year are special. If they were going off every night, they’d be less so.”

He thought about this for a moment. “Okay, then.”

We finished eating and, while Cassidy was busy collecting our trash, I got my Glock out of the glove compartment in the truck. I walked down to the riverbank and looked at the water.

Without turning to look at him I said, “I know about you and Angie.”

Cassidy stopped what he was doing. “You… uh…What do you…  What are you talking about?”

“It happened last Thursday, right? That night I had to work late?”

Cassidy walked over and stood next to me. He looked out at the river, too – I assume because he didn’t want to look at me. “I don’t know what…”

“That doesn’t make any sense.”

“We were both drunk. It was a stupid lapse in judgement. That’s all it was, just stupid.”

I pretended to think about that for a minute. There was tension between us that felt like the beginning of a storm.

I let his apology fill the air for another second. “Okay, then,” I said.

I answered him by raising the gun to his head and pulling the trigger. At the sound of the gunshot, a couple of mourning doves launched themselves out of a nearby tree. The stench of cordite combined with the muddy smell of the river as Colin fell forward into the water with a gentle splash.

I kicked his body a few times. “Of course I’m fucking mad, you stupid piece of shit!” I shouted at him. “Did you actually fucking think I wouldn’t be fucking mad!”

When I was done kicking his corpse, I leaned against the truck and let the anger drain out of me. Then I pushed Cassidy’s body out into the water and watched the current carry him away.

I’d see her next. Maybe there should be fireworks every night. Maybe nothing’s special. 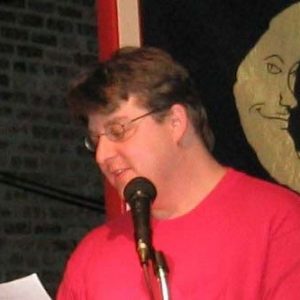 Once upon a time, Locus Magazine called John Weagly “a new writer worth reading and following.”  His short stories have been nominated for the Derringer Award multiple times, winning one in 2008, and various other accolades.  As a playwright, 100 his scripts have received over 150 productions on four continents and have been featured in the curriculum at Columbia College.