A Jump in the Dark

That summer, Paul and Suzie would drink during the day, watching old movies on TCM and talking about their favorite actors and directors. And they would drink at night, having a few Jim Beam-and-cokes before stumbling out to The Lampshade, the bar a few blocks from their gray-brick duplex. Paul had lost his job as a cashier months before, when the manager of the Kroger’s near downtown Memphis caught him sipping tequila from his thermos. Suzie had been out of work even longer. She’d been a teacher at St. Francis Catholic School. The number of absences and late days accumulated. She had been let go in January. “This isn’t purely bad news,” she’d assured Paul. “It’ll give me more time to recover from my hangovers in the morning.”

They were in their mid-thirties, but it felt as if they had already retired from the world. Paul thought they were not so much nihilistic as committed to living how they wanted. Yet they grew worried about their finances.

“We can get a smaller, shittier place,” Paul suggested.

“Don’t you think our current place is shitty and small enough?” Suzie replied.

They had a friend at The Lampshade, a jumpy, skinny guy named Rex. One rainy night in a back booth at The Lampshade, after Paul and Suzie had bitched for a while about their economic situation, Rex said he could do them a favor. Rex sold pills, pot, and sometimes a little coke to people who tended to be careful about buying such things: lawyers, doctors, professors. He was discreet and willing to make house calls. He told Paul and Suzie he had a package of coke he had been waiting to deliver to a brain surgeon who lived in a huge house in Germantown. But Rex had the sense, recently, of being followed. Maybe it was paranoia. But he couldn’t shake it.

“Would you two do the delivery?” he asked. “It’d be some quick cash.”

Paul looked at Suzie. Suzie grabbed his hand and squeezed. They turned to Rex and discussed a dollar amount for the favor.

Three nights later, as had been arranged, Paul and Suzie drove their Toyota to Rex’s neighborhood. They parked two blocks away, wanting to make sure their vehicle was not seen around Rex’s bungalow. “Are we really going to do this?” Paul asked, his heart beating like a crazed animal above his ribcage.

She placed her hand on the back of his neck, rubbing the tight muscles. “It’s a delivery. That’s all. The key is to not think about what we’re delivering.”

The windows of Rex’s house were lit. Paul and Suzie approached the door: it was open a few inches. Suzie glanced back at Paul. She placed her fingers on the door. She pushed it open.

Inside, they saw the massacre. Rex with blood covering his chest, sitting on the sofa, gasping. Across from him were the bodies of two men in white T-shirts, their faces largely missing from gunfire. Rex turned toward Paul and Susie, whispering, “I was right. I wasn’t paranoid.” He stared at them. He didn’t blink. Paul realized he would never blink again.

Suzie said, “Look here.” She strode over to the duffel bag by the coffee table. She squatted down and opened it. Bags of white powder were stacked inside.

Paul went over and squatted next to her. That was when they heard the sirens. They sounded three or four blocks away. “We can stay here, try to explain things,” Suzie said.

“Or we can take this shit and change our lives forever. We find a way to sell this, we’ll never work again.”

Paul looked at her face. She was breathing hard, yet her face was calm. “We can do this,” she said softly.

He nodded, squeezed her knee. The sirens were growing louder. She zipped the bag and flung it over her shoulder. They ran through the back door and climbed over the wood fence in the backyard. They walked once they reached the sidewalk. A humid breeze stirred the treetops. They moved away from the siren wails toward the dark, quiet street ahead, the backs of their hands sometimes touching. 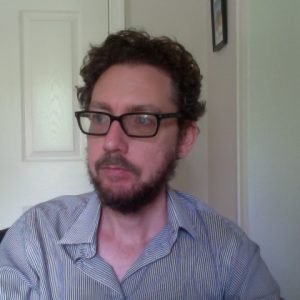 James Pate grew up in Memphis, and currently lives in West Virginia. His stories have appeared in storySouth, Black Warrior Review, Plots with Guns, Blue Mesa Review, and Pembroke Magazine, among other places. His book of micro-fiction, The Fassbinder Diaries (Civil Coping Mechanisms), was published in 2013. You can find him at Twitter @James__Pate.