A Hell of a Girl

“Harry Ledbetter, the heroin king of Wyoming,” the man greeted my dad as we walked into the back office of the Corn Licker tavern.

He lowered his gaze to me. “What’s this, Take Your Daughter To Work Day? Does she help you shake corn sugar into those shitty eight-balls you’ve been selling in my territory?”

In the darkness, the man looked like a refrigerator with a long black beard and a longer black leather coat. Except for his eyes, which made me think of the coyotes that prowled the farm outside my window after bedtime. I wondered what his howl would sound like.

Daddy didn’t usually take guff from anyone. I once saw him break the nose of a guy who worked for him after the guy had broken off the side window on one of Daddy’s trucks and said it wasn’t his fault. But all he said was: “Sweetie, I’m going to talk with Mr. Constantine. Go sit in the corner and read a book, OK?”

I knew what that meant. “Sure, Daddy.” I skipped behind Constantine, whose eyes followed me. I sat on a swivel chair that smelled like dead smoke and pulled my favorite book out of my Hello Kitty! backpack.

It was then that I saw another man in the room, a smaller version of Constantine in the room’s other shadowy corner.

Constantine shook his head and turned back to Daddy.

“If you think bringing her is a guarantee that you’ll walk out of here, Ledbetter, you’re badly mistaken,” he said. “You underestimate me if you think I’ll hesitate. But you’ve underestimated me from the beginning, haven’t you?”

Daddy dropped his head. “I know, Mr. Constantine. And I’m here to make things right.” He swept his crown-topped hat off his head and held it in both hands as if he were at Sunday meeting. “I didn’t know my boys were selling in your town, I swear. They were freelancing. And I’m more than happy to hand out discipline.”

“Well now, we might be on the same page after all,” Constantine said. “Because I too am more than happy to hand out discipline.” He reached into his coat and produced a knife with a long blade. Its jagged edges made coyote flashes in the dim light.

“I’ll need you to put your hand on that table,” Constantine said to Daddy, nodding at a surface half-covered with liquor crates. “Or I’ll have to ask Sweetie Poop here to do it.”

“No, it’s OK,” Daddy said, like he was agreeing to turn on the hall light after putting me to bed. Like it was no problem. I ran a finger along the edge of my book.

Constantine gave me a look, like I was supposed to cry or scream. He shook his head, then advanced on Daddy.

I opened my book. The smaller man looked my way, then moved next to Constantine.

A second later the top of the smaller man’s head blew apart. It looked like one of my birthday piñatas, just one full of blood and brains and bits of bone instead of Bit-O-Honeys and Butterfingers. The blast was still hammering hot needles into my ears when I swung the little Glock 26 onto Constantine, who looked at me like he’d gotten his own birthday surprise.

Daddy stepped aside and nodded.

Constantine dropped the knife and scrabbled under his coat.

I emptied the magazine.

Daddy waited for the thunder to stop rolling and for Constantine to stop moving before he swept me up in his arms and checked my wrists. “You OK, Sweetie?”

Daddy took the gun from my hand and replaced it in the hollow opening we had carved together out of the book: Crime Novels: American Noir of the 1950s.

“What do you say we get some ice cream, Sweetie?” Daddy said as we walked hand in hand out of the Corn Licker. “I think you earned two scoops today.”
“Blueberry? Like last time?”

Daddy nodded. “And the time before that.”

“And you’ll read me two chapters of The Killer Inside Me?” I asked, pulling out my other copy.

“Anything for you, Sweetie.”

“Anything for you, Daddy.” 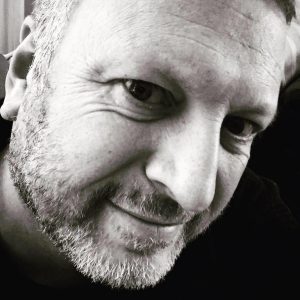 Jim Thomsen has been a book editor since 2010, after a career of twenty-plus years as a newspaper reporter and editor. He’s been published in WEST COAST CRIME WAVE and has read several times at Noir At The Bar Seattle. His hometown is Bainbridge Island, Washington, but he currently travels America in a 2006 Hyundai as a roving housesitter and noir photographer.