Roan hated the way the snow gleamed like thousands of shiny diamonds. The diamonds were everywhere, because the goddamned snow was everywhere. The sun’s glare made it look as though they’d struck it rich. But they hadn’t. Not at all. Because Roan had decided to try this job with a dumbass and now both of their snowmobiles were buried in the hard crust of an overhanging drift.

Piper, the dumbass, looked at Roan, then at the vast plain of white and said, “So now how we gonna get to the house?”

Roan stared at him, gave him his best prison I’ll-fuck-you-in-the-ass-while-you-sleep look, and said, “I don’t know, Piper. You said all we had to do was ride up there. Then it’s ours, you said. Easy as taking cigs off fish, you said. And now I say you’re full of shit.”

“No, man. It’s still gonna be easy. The house is just up the creek. Can’t be less than a mile. It’s all ours, right? You see anyone else out here today? We just got to get there.”

“And get back, Piper. We have to get back. If there’s shit in the house, and we take it, how are we gonna get it back to the truck?”

“And getting there ain’t no small thing either, dumbass. It’s a fucking mile.”

Roan rubbed his eyes, took off the ski mask, and rubbed his stubbly chin. Only out of the pen a week and now he was stuck with one of the dumbest creatures to slither across the planet, out here in the middle of godforsaken frozen nowhere. There weren’t even any birds, for chrissake. Probably nothing but moose, and coyotes, and bears, and wolves. Shit. Roan hadn’t even thought about the wolves.

“Hey Roan, I’m getting cold, man. It’s like a thousand degrees below zero out here.”

“I mean, how can it be this freezing-ass cold when the sun is out? It’s really weird, man.”

“Because it’s January, and it’s Wyoming, dipshit. Now shut the fuck up.”

Roan tried to wrap his mind around their predicament. He tried to figure a way to salvage the job and somehow get up to the house that supposedly was the summer place of some rich faggot that kept all of his paintings there to impress his summer boyfriends. It wasn’t going to happen. The snowmobiles they’d rented, that neither knew how to ride, had floundered and all of their attempts to dig them out had been futile.

They couldn’t walk out. Piper had tried, and had sunk up to his nipples in the snow, thrashing and screaming like a bitch. When Roan finally pulled him out, he said that he hadn’t even touched ground. Now Roan regretted pulling him out.

“You think we could just swim?” Piper said.

“I mean, like they do in the movies in the quicksand. And I watched this show where they said to swim if you are in an avalanche. And that’s snow, right?”

“Fine.” Piper put his hands in his armpits and shivered, looking like a dashboard Buddha.

So, Roan thought, we can’t walk. We can’t ride. We can’t wait for someone to come because we didn’t take a trail, thinking that it would be faster if we went cross country. Wrong.

“What?” Roan’s gaze searched the frozen pines, the dunes of snow, and the narrow frozen creek below them. He didn’t see anything. “I don’t think so.”

“There it is again!”

This time he heard the howl and he knew what it meant. So, just in case, he pulled the .45 from his coat and shot Piper between the eyes, spraying red and gray into the previously white snow.

Roan hoped it would give the wolves something to eat, before they got to him. Maybe they’d get full and go away.

If not, at least the dumbass had finally shut the fuck up. 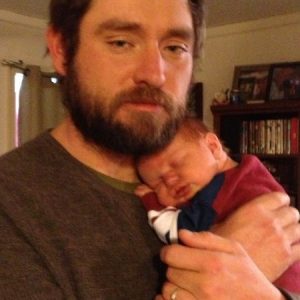 Erik Storey spends most of his time pretending to be Travis McGee. When reality intrudes, he spends his daylight hours either working at the day job or tending to the little ones. At night, he tries to smack words together to form sentences. Then he takes those sentences and attempts to folds them into crime stories. He does all of this in a little house in western Colorado, in the company of his wife, two daughters, and three dogs. He can only be contacted through the best social media of our time, Twitter. Handle @ErikStorey.