A Bad Day to Quit Smoking

I looked out the window, popped a nicotine lozenge, and looked back to see that the bastard had opened the door and staggered into the hallway. His blood trail was dark crimson and soaked the carpet. He gripped his stomach and leaned against the door frame. When he saw me looking at him, he winced and ran.

“Son of a bitch.” I said, wishing that I’d picked another day to quit smoking.

I took off after him and my feet slid out from under me. The apartment was carpet, the hallway linoleum. The bastard bled enough to form a puddle. I crashed into the opposite wall and yelped. The warm blood went cold on my white shirt.

Minutes ago, Marty McNeilly was on bended knee looking through the barrel of a Ruger. He was a job. I was hired to stop a fire from spreading. The spark was Marty travelling all over Southie spouting his newfound crime connections. Lawyers. Give them one assignment and they think they’re consigliere.

So, Marty was lined up and ready for the wooden box when he started pulling heart-strings.

I aimed low, shot twice into his abdomen. The silencer whispered; Marty gasped. All in all, I thought he was a damn good victim. I popped in a lozenge and he’s running out of the apartment and leaving his liquids behind.

“Fuck!” I yelled, getting up from the floor soaked in crimson.

As I ran, I noticed a neighbor’s door open. There’s no hiding at full sprint. I dodged Marty’s blood and tried to catch up before he decided to pound doors and yell for help.

He disappeared into the stairwell on the left side of the hallway. I raised my gun to clip him. No good, too slow.

I made it through door and onto the landing. He was panting and wheezing two flights up. I wondered how the hell he made it that far. But I’d wasted enough time. I grabbed the railing and pulled myself up the stairs, two-by-two.

Marty lives on the seventh floor of a ten-story building. I made it one flight before I heard the roof access door open and shut. Marty made two mistakes. First, a bullet in the belly is one of the most painful ways to die. He should have opted for the headshot. Second, he took to the roof.

I burst into to open air, gun raised. Marty didn’t attack. He was running, more accurately speed-walking. Admirable. He had one hell of a pain threshold.

“Marty. Where the hell are you going?” I asked.

He turned toward me, pale and shriveled up.

I raised my gun and fired three bullets into his back. He twitched on the first one, the rest didn’t faze him. I pulled the trigger again.

The last one hit him hard. He stumbled forward, but didn’t fall. Then I noticed how close he was to the edge and jogged after him. There’s a busy street below and I didn’t need him making a splash in front of a hipster café.

Then he did it.

I wish I could say that I narrowly missed him.

The roof’s barrier was waist high. Marty toppled over it, dead in the air. And, of course, he made a splash in front of the hipster café. I could see the cell phones lighting up. I wondered if they were calling the 911 or taking video. You never know these days.

I looked at the splat and I figured that I had a few minutes before the cops showed up. Wrong. Sirens blared and two cruisers turned the corner a block away. Instinct said run. But I was tired and I had friends behind bars that I wanted to see.

I turned from the ledge and looked down. A pack of cigarettes with a book of matches tucked under the top flap. Must have been Marty’s. I smiled, picked them up, wiped blood from the pack, and lit up. 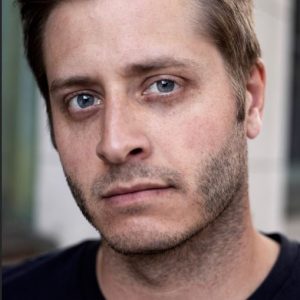 Ethan Robles is a writer working out of Boston, MA. His fiction has appeared in Aphotic Realm and Sirens Call eZine. He is a staff writer at morbidlybeautiful.com and a contributing writer at horrorhomeroom.com. You can follow him on twitter @roblecop.