In the Know: Hardway by Hector Acosta 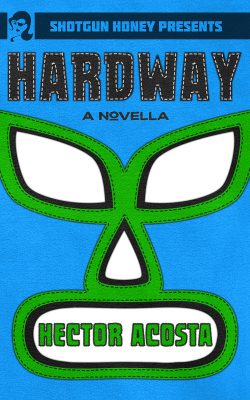 Today, Shotgun Honey celebrates its publishing relaunch with the release of Hardway by Hector Acosta. Hector as he’ll reiterate below has contributed to both our flash fiction site content and the Both Barrels anthology series. His first anthology story featured Thursday Malone, a character I immediately gravitated, and considered with much potential. When we branched out into publishing longer works under One Eye Press, I hounded Hector for a Thursday Malone story until he finally submitted Hardway. My first reaction was Where is Thursday? And what am I supposed to do with a story about a hormonal kid with fantasies about wrestling? Instead of throwing it back and demanding Thursday, I dug in, and to my surprise I enjoyed what Hector submitted. It’s not typical OEP/SH stuff, but it was a story with heart, about family, and about the adolescent fantasies that lead to becoming an adult.

Let’s pulled down the mic, and get this event started.

So today is the big day, HARDWAY is entering the ring. What is the music blaring on the PA?

I have to preface this by saying that I’ve been accused of having HORRIBLE music taste. Most the stuff I listen to is either taken from wrestling (shocker), or musicals.

That out of the way, Hardway totally comes out to My Chemical Romance’s Welcome to the Black Parade, partly because I always thought that song would make a great wrestling intro, and also because there’s something about the way the song is structured that mirrors Hardway‘s story. It has a slow, melancholic start, but halfway through the tempo picks up and doesn’t let up for the rest for the song.

Every great wrestler has a great backstory, what’s the backstory for HARDWAY?

The idea of Hardway came after I fell down a Youtube hole and ended up watching a bunch of backyard wrestling videos. Backyard wrestling has a not entirely undeserved bad rap. But as I watched matches where teenagers beat the holy hell out of each, and crash through elaborate set ups even the WWE wouldn’t perform, I realized how much the kids also had to love wrestling. You don’t get thrown off a ladder and into hard concrete if you only sort of like something.

And that’s when Hardway popped into my head. I’d written a couple of stories involving wrestling before, usually from the perspective of a wrestler. And as much as Spencer, Billy, and the rest of their friends would like to think so, they are more fans than wrestlers. I conceived the first version of Hardway as a short story, but after being finished with it, I found I had more to say about Spencer and the RBWL and got to reworking it.

You’ve got Welcome to the Black Parade playing, the fans are rallied behind your backstory, what’s the signature move? What’s going to get fans rooting for HARDWAY?

If Hardway is in the ring, mounting a comeback and preparing end the match, I could hear the announcers (Jim Ross in this perfect, fantasy world of mine) screaming “THE KID HAS HEART,” in that great, Southern drawl of his.

Hardway is a book that ends up wearing its heart on its sleeve. Don’t get me wrong, there’s a crime, there’s people doing stupid things for stupid reasons, and ending up getting mired in violence because of it, but more than anything, it’s about Spencer, a kid who doesn’t quite fit in and is feeling more and more like an island. About the love he has for wrestling, for his brother, and for his brother’s girlfriend. Which is largely what gets him in trouble with a psychotic drug dealer and apartment over.

Being the man behind the mask, the great puppeteer, tell the fans about Hector Acosta.

I live in New York with an understanding wife who allows me to watch way more wrestling than any human being should and a dog which I have a love/hate relationship with. I’ve always enjoyed writing, and have a bunch of half finished vampire detective books to prove it. I became more serious about it when I discovered two things: Twitter, and Shotgun Honey. Both opened my eyes to an insane amount of talented, welcoming writers and their nasty (in the best way) stories. My first thing I ever submitted in fact was a flash fiction piece for Shotgun Honey, and I’ve been–too slowly lately–writing ever since.

HARDWAY has the title and the belt, and the brass wants you for a big tag team event, who do you want in your corner?

Short answer? Just just on my twitter (@Hexican) and pick up the book from everyone I follow.

I’ve mentioned him before, but Gabino Iglesias needs to be read by more people. His barrior/supernatural/noir book Zero Saints was a game changer.

Angel Colon is one messed up guy, and I say that in the nicest way possible. No Happy Endings has probably one of the most shocking opening chapters I’ve read in a while. Plus the dude writes for the WWE comic, so I gotta say nice things.

I’m really looking forward to Thomas Pluck‘s Bad Boy Boogie. Really dig his short stories, and if you want a noir/superhero mashup, you have to read his Denny the Dent collection.

Dave White writes of New Jersey so well I basically have no reason to ever go there.

Sheesh, this turned into a ten match didn’t it?

A regular Royal Rumble, for sure. As a fan for wrestling, what is your favorite moment, event, or match up?

This will probably seem like a random choice to most, but it holds a special place for me for a couple of reasons. First, this was at what probably was my peak wrestling fandom. We’re talking ‘takes part in online wrestling roleplay’ level here. Secondly, the show was in El Paso, Texas, my hometown, so I got to experience it live with a bunch of friends. And finally, and probably most importantly, we got to watch the hometown hero Eddie Guerrero make a glorious, twenty minute entrance.

It’s funny, if you ask me what matches were on that show, I couldn’t tell you. All I remember is how the entire arena exploded at Eddie’s theme song, and how we hung at every word he said.

You’ve got the fans going crazy like Eddie with your entrance, what are you going to do for an encore?

I have a couple things I’m working on at the moment.

First up I’m looking to finish a crime story set in a border factory town. It’s the first piece of fiction where I’ve actually gone out of my way to do some research, as it not only takes place in factory town, but also in the 1960’s.

I’m in the revising stages of a horror novella right now. I’m hesitant to speak too much about because I’m not sure if it’ll see the light of day, so we’ll see. I will say that the thing which got me writing it is because for once, I came up with what I thought was a great, fitting title for it.

And finally there’s Thursday Malone. He’s a character who’s shown up in the Shotgun Honey anthologies and one of my favorites to write, and I’m not going to lie, a big part of it just because of the name itself. If everything goes as plan, I should have a new tale before the end of the year with him.

We definitely hope to see these get to the ring. What move would recommend other wannabe wrestlers have in their arsenal?

In a wrestling match, we often only remember the big moves- the finisher that knock a wrestler out, or allows their opponent to get the pin. But the reality is that very few matches would work if the wrestlers did their big moves over and over again. A good match needs to have a sense of rhythm, a back and forth that pulls the audience in.

In writing, sometimes we focus too much on the ‘big moves’. On making sure that the writing is perfect, that we have that great opening line, or that our dialogue sounds just right. And yeah, those are important, but what’s more important is the most basic of things– just showing up to write.

More talented writers have said this than I, and I”ll be the first to admit I don’t always follow this advise, but if you don’t sit down to do the work and build a writing routine, the rest isn’t going to matter. Just like a wrestler who can pull off a 450 off the top rope but doesn’t know how to run the ropes will probably not get anywhere.

Praise for HARDWAY by Hector Acosta

“Hardway hits like a chair to the back of the head, but underneath all the bone-cracking action there’s also a surprisingly sweet story about a boy trying to make his way in the world. If you’re a fan of noir or wrestling – or both – this is one show you’ll want to buy a ticket to.”

“Witty, touching, and as melodramatic as any classic pro wrestling story, Hardway stands as an excellent debut from Hector Acosta.”

“Hector Acosta delivers a fitting tribute to the passion of pro wrestling. Parts coming-of-age, crime, and nostalgia – with a bit of an 80’s vibe to boot – Hardway hits all the right notes.”

—Christopher Irvin, author of Burn Cards and Safe Inside the Violence

“A novella that hits you where it hurts, forces you to grapple with your desires and defeat, but ultimately leaves you panting and begging for more.”