What’s your book about?

You start. You stop. You start again. You fumble around your marble mouth. Your tongue all of a sudden weighs twenty pounds. You then say some canned crap that sounds a lot like canned crap.

This is the drill when I’m sometimes asked about my books. Keep in mind I used to pitch script ideas to studios. I was better at that. That I can get geared up for. That I can prepare for. Basically I down an unreasonable amount of coffee and work out the pitch ahead of time. Talk it through. Work out the kinks. Research who I’m meeting with and the company / studio they work for. Try to understand what they might want to hear. Also, when you do those types of meetings you’re almost taking on a character of sorts. It’s you not being you. Another version of you, you’re a sales guy all of sudden out to close a hot lead. You’re not the writer bleeding out every word, searching for the best way to describe how it feels to be empty and alone in the universe. No. In a pitch meeting you’re working a room and brother, you are on. But in a way it doesn’t matter, because in those rooms, a lot of times, it’s all up of grabs anyway. I’ll give an example:

You say, “This script is about an average person’s struggle to find hope in hopelessness.”

They say, “You mean like Fast and the Furious?”

You say, “See, you get it. Exactly like Fast and the Furious.”

That’s sometimes how it goes. You say something. They say something. You pivot off what they say, because you desperately want the gig, and in the end it’s this mangled mess of a thing that neither one of you are really all that interested in. You smile, they smile, you accept their bottle of water and hope you see somebody cool as you leave the studio lot.

With a novel it tends to be different, for me at least. This is something that you set out to write and, at least with me again, no one told you That sounds amazing, go write that, can’t wait to read it. Books are all a little more personal. A little more of you pours into them. A bit of you seeps in somehow. So when you’re cornered in a random situation and asked the question of what your book is all about you might have to pause. Sure, there is a quick Amazon description you can throw out there, but that somehow feels like cheating. Sounds a little like your reciting the alphabet. You also don’t want to stand there for half and hour taking a deep dive into the backstory of the Waiter that takes a bullet to the head on page five.

To be clear, you should absolutely memorize the Amazon description as a backup if nothing else. Gotta have something in your back pocket if your brain goes shithouse. All of this is to say, hey I get it, it’s hard to talk about your stuff sometimes.

People also want to know what genre or category your write in. Reasonable question, but another one that can trip you up.

My stuff, my writing, is the product of all kinds of things. When I was in screenplays I’d write several different genres. Horror, rom-com, thrillers or whatever a meeting might want me to be. If you have to jam my books all into a category? Yeah, it’s crime fiction. Some are very crime fiction and some are tilting towards other things.

My new one, Genuinely Dangerous, is a tough one to plant a label on. That’s by design. When I started out with it I wanted it to be this fun, insane book that read like Chuck Palahniuk joins Elmore Leonard on a road trip with Hunter S. Thompson driving and Charles Bukowski serving drinks from the backseat.

If I pitched that as a movie the silence in the room would be deafening. Blank stares. Heads down looking at iPhones. Hell, that might be the last meeting I ever had. This would not be well received around town. Hard to make a poster of that. Difficult to envision a trailer with that setup.

But you can do that in a book and I’d like to think I did just that. You can really do anything you want in a book. Granted, yes, there are some book ideas that more commercially viable than others, but as far as just writing something, it’s pretty damn wide open with books.

Take what I just said about the Chuck and Hunter road trip thing and strap this on — Genuinely Dangerous is story of a down and out screenwriter who’s fallen out of favor with the movie biz because his second movie tanked and tanked hard. He’s taken refuge in the suburbs and he’s become obsessed with getting back into Hollywood. He has a crazy idea for a movie. He wants to embed himself with a crew of bank robbers and film a documentary while they work their dirty deeds. You know, war correspondent style. What could possibly go wrong?

Okay. Now that’s a thing. That’s a book. It’s dark comedy, satire, big action crime book and it’s the book I wanted to write. It’s a book I would want to read even if someone else wrote it. So that, kind folks, is what my book is about.

And yes, it’s exactly like Fast and the Furious. 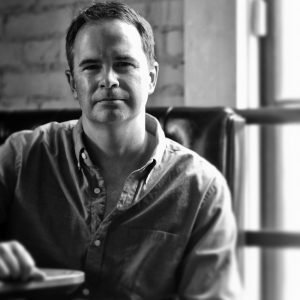 Mike McCrary is a screenwriter and author of GETTING UGLY, REMO WENT ROGUE and GENUINELY DANGEROUS. His short fiction has appeared in ThugLit, All Due Respect, Dark Corners, Out of the Gutter, Shotgun Honey and The Big Adios. Mike has been a waiter, securities trader, dishwasher, investment manager, and an unpaid Hollywood intern. He's quit corporate America, come back, been fired, been promoted and fired again. Currently, he writes stories about questionable people who make questionable decisions.

Mike McCrary is a screenwriter and author of GETTING UGLY, REMO WENT ROGUE and GENUINELY DANGEROUS. His short fiction has appeared in ThugLit, All Due Respect, Dark Corners, Out of the Gutter, Shotgun Honey and The Big Adios. Mike has been a waiter, securities trader, dishwasher, investment manager, and an unpaid Hollywood intern. He's quit corporate America, come back, been fired, been promoted and fired again. Currently, he writes stories about questionable people who make questionable decisions.