To Stalk or Not to Stalk

To stalk or not to stalk, that is the question. At least for Lexi Mazur, the main character of my new novel Stalker Stalked. She’s stalked her current boyfriend, her ex-boyfriend, and now has her sights set on Magnolia Artois, the star of the hit reality TV show Socialites. But what happens when certified stalker Lexi finds herself being stalked as well?

Before working on this novel, I had written The Ancestor, a doorstopper about a man who wakes in the Alaskan wilderness believing he was frozen in time from the Gold Rush. The book was very serious and required more research than I’d ever done for a novel, so in my next one I wanted to write something lighter. I’d been watching the show You from the Caroline Kepnes novels, which is so great at making the stalker Joe Goldberg the hero you root for (sort of), and I figured a cool twist would be if that kind of character was being stalked as well.

For this I watched a lot of reality TV: really bad, horrible, depraved reality TV. I needed to get in the mindset of the type of people who are on these shows and also those addicted to them. Honestly, I got a little addicted too, especially the most batshit crazy ones. It also was the beginning of the height of the pandemic in NYC, so no one was doing anything but staying at home and watching TV.

To round out the plot, I made Lexi a pharma rep who begins to sample her own drugs way too much. She exists in this fugue state where she and the reader doesn’t always know what’s real and what isn’t. The book is also a comment on our social media obsessed culture. Magnolia is an influencer, something Lexi aspires to be, but Magnolia is really just as miserable. Her life is perfected online, but a mess in reality, even though those parts of herself are rarely shown. Lexi has a few obstacles to overcome throughout the novel too. Kick her pill addiction, quell her stalking habits, and discover who is pursuing her: a best friend, a detective assigned to her case, one of her doctors, or even Magnolia herself?

I’ve just finished the feature screenplay version of the book, sticking closely to the text while adding a few more hallucinogenic flourishes. It would be Lexi’s dream to see herself on the big screen, so maybe in my reality, that can come true. Regardless, the book and the film version has probably been one of the most fun projects I’ve ever worked on. There was a freedom in this story—since it’s so nuts, I wasn’t confined to reality reality. The novel can be read as a thriller, satire, smut (like one reviewer has mentioned), and love it or hate it (and I’m foreseeing a split with this one), it’s certainly not boring.

So, give Lexi and her tale a try, and prepare to be stalked for two hundred fifty-one pages. 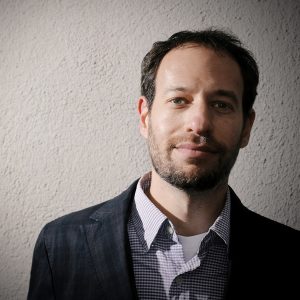 Lee Matthew Goldberg is the author and screenwriter of eight novels including THE ANCESTOR, THE MENTOR and the YA series RUNAWAY TRAIN. His projects are in various stages of development for film and TV. He has been published in multiple languages and nominated for the Prix du Polar. STALKER STALKED will be out in Fall ’21.