In Praise of the Outdoor Thriller

My debut novel, Twentymile, centers on a suspicious death inside Great Smoky Mountains National Park. When the special agent investigating this death travels deep into the park’s backcountry, she comes face to face with an unexpected danger and must fight to survive against men who mean her harm and a winter storm that could prove just as deadly. The story is, in part, a love letter to a place that means so much to me. When I left the overdeveloped flatland of central Florida for college in North Carolina, those slump-shouldered mountains, venerable forests, and clear, cool streams struck me as a revelation. They were my first taste of wilderness, and I was hooked.

Of course, novels of crime and survival in the wilderness are nothing new, and anyone who attempts to write one would have to admit the obvious reference points. (Here’s to you, James Dickey and Jack London.) But in this post, I’d like to highlight some novels that influenced me in very specific ways during the writing of Twentymile, and which in turn I’d highly recommend to readers.

Hold the Dark by William Giraldi.

“The wolves came down from the hills and stole the children of Keelut.” Thus begins a novel whose prose is as gorgeous as its story is unnerving. In a remote village in the wilds of Alaska, children have gone missing, and the locals blame it on wolves. Following her son’s disappearance, Medora Slone contacts an aging wolf expert, Russell Core, to help her locate the boy’s remains. Her husband, the boy’s father, is returning from the war in the Middle East soon, and she “can’t do without Bailey’s bones. I can’t have just nothing.” Core agrees but soon finds that some people harbor a nature far darker than the wolves he has spent his life studying.

There’s so much to praise in this book, but it’s the prose I come back to time and again—compact, precise, harrowing. Every word carefully chosen, the sentences meticulously constructed. Even the most violent scenes (and there are some doozies) are gorgeously rendered and all the more impactful for it.

Bearskin by James A. McLaughlin

Winner of the Edgar Award for first novel, Bearskin’s plot features fairly standard thriller elements. Rice Moore, a man with a shady past, seeks a new life in a remote nature preserve in the mountains of Virginia. Naturally, that past catches up with him, and Rice must summon his particular set of skills to survive. It’s plotted and paced with great skill. But what truly sets Bearskin apart is its treatment of the land at its center. McLaughlin, a native of Virginia, turns a naturalist’s eye on his chosen setting and treats the reader to dizzying descriptions of the flora and fauna all around Rice. It’s a land so teeming with life, so different from the desert he fled, that it overwhelms the senses. These passages are so abundant, they lend a sense of disorientation to the narrative that both draws readers in and causes them to question Rice’s state of mind. Are his fears of impending disaster well-founded or the product of an overheated and unmoored mind?

It has perhaps become a cliche to claim that a novel’s setting is as much a character as the humans who populate its story. But every now and then, this overused assertion is still true. I can think of few better examples than Bearskin.

Amy Raye Latour goes missing during a hunt in Colorado backcountry, and Bureau of Land Management Law Enforcement Ranger Pru Hathaway is determined to find her. Told from their interwoven perspectives, Breaking Wild is a story of two complicated women who are very different from each other, but who share an internal toughness that such rugged country requires of people. Amy Raye is tortured by past trauma, but she must set that aside and summon the grit and skills necessary to survive her increasingly dire circumstances. Pru, for her part, is determined never to give up on the search for Amy Raye, staying at it long after most would have called it a loss.

I’m not sure Tsula Walker, Twentymile’s protagonist special agent, would exist if it weren’t for Breaking Wild. At the time I read Les Becquets’s novel, I knew that I wanted my protagonist to work in a law enforcement capacity for the National Park Service, and that the story would call upon her to survive the outdoors under extreme circumstances. I also had a vague sense that I wanted the protagonist to be female, though I had no interest in the common female protagonist as written by men: defined in large part by her appearance and her relationship (or potential relationship) to the men around her. Can’t a woman be defined simply by her badassery? Her professional skills and dedication? Les Becquets answers this question in the character of Pru, whose primary concerns are the job she loves and the teenage son she’s raising on her own. And the answer is damn compelling.

The River by Peter Heller.

What was supposed to be a pleasant paddling trip down a river in northern Canada turns into a nightmare for two college buddies. First, there’s the matter of the wildfire looming in the distance that seems to be growing ever closer. Then there’s the woman they come across, nearly dead, and a potentially homicidal boyfriend who may be lurking out there somewhere, aiming to finish the job. Can these two friends make it to safety with their new passenger before man or nature claims their lives? No one writes of the intricacies of canoeing, fishing, hunting, and outdoor survival quite like Peter Heller. In addition to being a graduate of the Iowa Writers Workshop, he is himself a renowned outdoorsman. The intimate knowledge he brings to his subjects lends them a poetic concreteness that other writers can only hope to fudge convincingly.

I read The River while I was revising my manuscript, and I almost gave up as a result. How could I ever hope to measure up to what I’d just read? Once that initial despondency passed, I was able to take some lessons from Heller’s writing—chief among them, the novel’s propulsiveness. He takes the time to develop the two central characters fully, delving even into some episodes of backstory. But much like the river at its heart, the story never stops its forward motion for long. The lesson I gleaned, written somewhere in a note on my computer: Keep your plot moving like a wildfire is chasing it.

Mid-way into my first draft of Twentymile, back when I had zero idea if any publisher or readers would be interested in a crime novel taking place in a national park, I discovered Scott Graham’s series of books beginning with Canyon Sacrifice. My question was answered. Yes, in fact, readers and publishers might be interested in such a book. In each of Graham’s seven novels, archaeologist Chuck Bender finds himself ensnared in a mystery, the investigation of which is not only engaging in its own right, but which also grants readers a “behind the curtains” look at unique aspects of the national park that is each novel’s particular setting. Of particular interest to me–because this is a heavy theme in Twentymile—is the novels’ recurring interest in the inhabitants of these lands before they became “public” U.S. property. As Graham recently said in an interview, what you’re looking at when visiting a national park is the past.

Lest you be misled into believing these novels are simply travelogues or historical screeds with mystery trappings, let me assure you: They are fun, often thrilling books, with surprising noir elements to them. Graham also has some of the best opening lines in the business (“Her death was her own damn fault.” “The ram never heard the shot that killed it.”).

McCarthy’s conception–especially in his early Appalachian novels–of the forest as a place offering both sublime beauty and the most base savagery has seeped into the pores of many a writer’s works, Twentymile included. This vision is perhaps no better evidenced than in the opening of Outer Dark. Three nameless men wander the peaks of mountains and the hollows in between. They make camp, eat what they have, sleep, wake up, and repeat. The whole time, they say nothing. And yet, McCarthy’s prose suffuses this aimless wandering with such terror that the reader knows right away: these men are Evil with a capital “E,” and God help anyone else who crosses their path. The rest of the novel bears this suspicion out in a manner that, were I to describe it, would justify content warnings.

That first scene, with its palpable sense of foreboding, is why I chose to begin my own novel with a chapter featuring the story’s antagonists as they disappear into the park’s interior. In contrast to Outer Dark, my characters speak with each other, and their capacity for violence is on full display, not simply suggested. But my aim was the same: Allow the reader to understand the threat that lurks in the forest—the one we pray our protagonist doesn’t encounter even while we know she must.

When wildlife biologist Alex Lowe is found dead inside Great Smoky Mountains National Park, it looks on the surface like a suicide. But Tsula Walker, Special Agent with the National Park Service’s Investigative Services Branch, isn’t so sure.

Tsula’s investigation will lead her deep into the park and face-to-face with a group of lethal men on a mission to reclaim a historic homestead. The encounter will irretrievably alter the lives of all involved and leave Tsula fighting for survival—not only from those who would do her harm, but from a looming winter storm that could prove just as deadly.

A finely crafted literary thriller, Twentymile delivers a propulsive story of long-held grievances, new hopes, and the contentious history of the land at its heart. 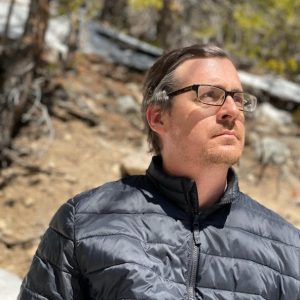 C. Matthew Smith is an attorney and writer whose short stories have appeared in and are forthcoming from numerous outlets, including Mystery Tribune, Mystery Weekly, Close to the Bone, and Mickey Finn: 21st Century Noir Vol. 3(Down & Out Books). He’s a member of Sisters in Crime and the Atlanta Writers Club.

When he isn’t writing and paying the bills, Matt enjoys fly fishing, hiking, and backcountry camping. He holds a degree in English from Davidson College and a law degree from the University of Georgia. He lives near Atlanta with his wife, son, and father-in-law.